‘Chicago’ by the numbers 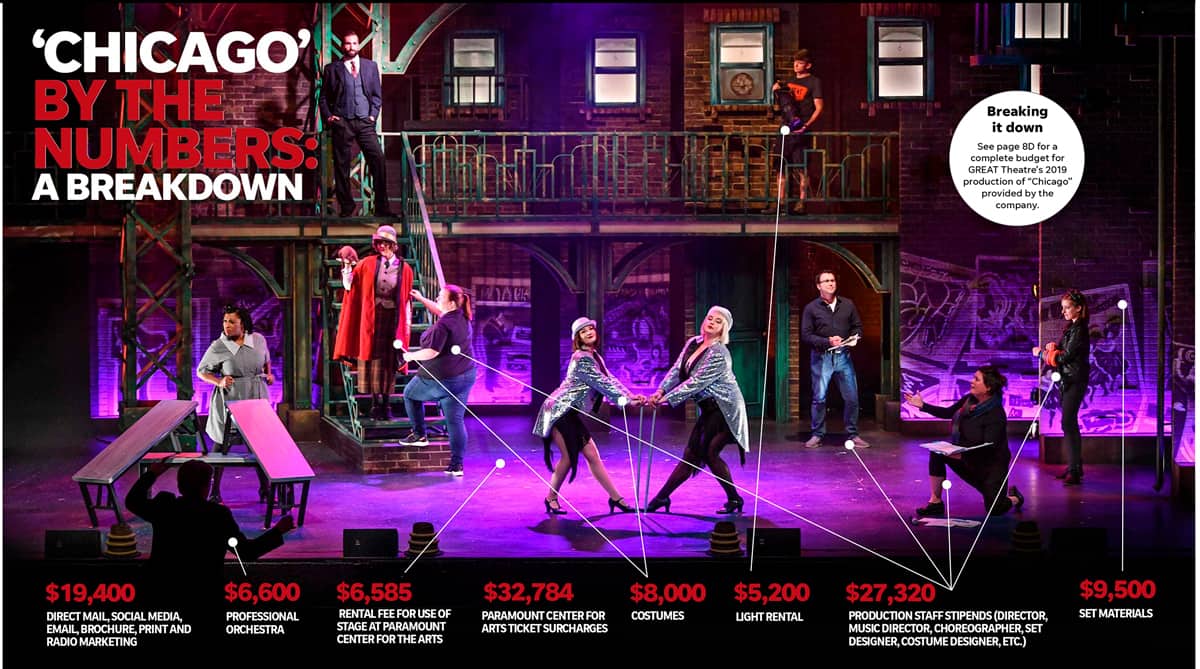 WAITE PARK — For GREAT Theatre to mount a Broadway-style musical, it requires a large cast of volunteer actors, hours of rehearsal, gallons of paint, racks upon racks of costumes and, of course, an enthusiastic audience.

As a nonprofit organization, all of GREAT’s budgets are public information. But artistic director Dennis Whipple said people are still shocked when they hear about the steep costs associated with putting on a show.

Months before the curtain rises on opening night, theater companies like GREAT are already paying thousands of dollars to put those wheels in motion.

“First we do royalties for scripts and music rental. For ‘Chicago,’ that’s about $1,700 per performance, and we have eight of those,” Whipple explained. GREAT paid a total of $15,124 in royalties to Samuel French Inc. for rights to perform the show. “That’s money due before we even tell anyone we’re doing the show.”

Purchasing the rights to a show doesn’t grant a company the right to perform it in perpetuity; the rights are solely for the performance dates listed. After GREAT is done using the scripts and music provided by Samuel French, “(we) have to ship back (the materials) to be destroyed.”

The royalties contract also includes major restrictions. “We can’t copy the Broadway set, or costumes, or choreography. We can’t change the gender of a character, we can’t change a line, we can’t video tape it — that’s in bold,” Whipple said.

For the design team of GREAT’s “Chicago,” those restrictions are actually a blessing in disguise: They allow for greater creativity and innovation, ensuring the production will be unlike anything audiences have previously seen.

“We have a joke that people leave our shows and go, ‘Did you buy all that at Walmart? Where did you get that?’ Well, it was nothing. We were given a piece of paper, and with resources and creativity, all of that was created,” Whipple said. “It’s original, so it’s locally made for local audiences. There will not be another ‘Chicago’ like ours. The touring ‘Chicago’ is visiting every city in the country, but ours is unique to our theater and our community.”

But explaining the nuances of a rights agreement to those outside of the theater community can be difficult, Whipple said. “I think (people can be) shocked about royalties,” he said. “The idea that we have to pay for it and we can’t change it, and we don’t own it, and they can’t video tape it — that’s frustrating to people. They don’t understand it.”

But Whipple thinks folks may be even more surprised to learn what GREAT’s biggest expenses are: paying GREAT employees or contracted staff, and Paramount Center for the Arts ticket surcharges.

For “Chicago,” the former category amounts to $96,676 total, which breaks down to:

Those are big numbers, to be sure, but Whipple said GREAT “really (values) paying people, because who doesn’t value being able to eat and have housing?”

“There can be this idea around community theater that people just do it for the fun of it. That is one reason, but it is also an actual skill that people go to school for and get degrees in,” he said. “This is an industry. We have 12 full-time employees, and this work allows them to purchase mortgages and raise their families. It’s a business that employs a lot of local artists.”

GREAT Theatre stages most of its productions at the Paramount Center for the Arts, save for a handful staged in their own Helgeson Learning Lab Theatre or elsewhere in the community.

That’s where the latter category of major expenses, Paramount ticket surcharges, comes in, amounting to $32,784 for “Chicago.”

“You pay a gross percentage of sales based on how much you sell. The more (tickets) you sell, the less you pay. We’re at 9% of total ticket sales (paid to the Paramount,)” Whipple explained. “We pay them 7% of our subscription sales for all their subscriber tickets. We pay $1 for every comped ticket. 3.5% on all credit card sales. 50 cents for every redeemed voucher or complimentary tickets. That covers, as we understand it, box office, house managers, that type of work.”

That nearly $33,000 does not include the additional $6,585 paid in rental fees to the theater for use of the stage for three weeks. While a fair chunk of change does go to the flashier components of the show — $9,500 to set materials, $8,000 to the purchase and creation of costumes, $5,200 to light rental — the majority of GREAT’s budget goes toward expenses that most audiences never consider.

“As an audience member, you’re just lost in the experience. You’re so drawn in to what you’re seeing that you don’t think about it,” Schirmers said. “(Audiences) don’t even know what they don’t know.”

Whipple concurred, adding that many of their larger expenses are fixed costs over which GREAT has no control, like royalty fees or the Paramount’s ticket operations fees. Those standing expenses are the budgetary framework around which GREAT builds its season.  “Production expenses are a very stable number. We do work backwards. It’s asking ourselves, ‘Can we do ‘Chicago’ for $9,000 so we can do ‘Elf’ for $11,000?'” Whipple explained.

“(This year’s musicals’s) royalties are more expensive than others …There’s a risk we’re taking there, but we also have to do these shows, because they are so exciting,” Whipple said, adding that straight plays like “Alice in Wonderland” and “Our Town” have significantly lower costs associated with them, helping to “create balance within the season.”

The final piece of the puzzle is money raised by donors. GREAT is raising funds to support its operations “all year, every day, all the time,” according to Whipple, and that cash flow is especially important during a season like 2019/20, which features four especially sought-after Broadway-style musicals.

For “Chicago,” GREAT looked at its income from previous September musicals to estimate an income of $166,600. That leaves $44,956 to be raised by donations. “(Fundraising) is a large part of what we do, because we have to raise that $45,000 for each of the shows,” Whipple said. “In order to do these big musicals, it really is the donors who make the difference.”

And even GREAT’s most ardent donors can be shocked by the depth and breadth of theater company costs, Whipple said. “There are a large number of people who don’t understand the value (of arts work), and then we raise $45,000 from the people who do. But even if they are one of the donor supporters, it still blows their mind. ‘You’re paying $15,000 just to say you’re doing ‘Chicago?’ What?!” he laughed.

The value of arts work: It’s the invisible bottom line in all of GREAT’s budgetary considerations. How much does this community value having access to professionally-produced local theater? And are they willing to put their money where their mouths are? “We hear it when they move away. ‘Oh, I went to the community theater in our new town, and it’s bring-your-own-costume,” Whipple said. “And there is a place for that. … But that isn’t the kind of theater we do. We want those amazing lights and confetti canons and turntables and flying and live orchestras.”

So yes, Whipple said, St. Cloud “supports theater and goes to theater,” and values work in the arts — perhaps more than they realize. “This is a very giving community,” he said. “They help make great art happen.”

And if you remain unconvinced that GREAT’s productions necessitate such a hefty price tag, Whipple would invite you to come to a show and take a look around at your fellow audience members. “The response we get from the audience is priceless. It’s priceless in the way that families attend together and aren’t on their phones, couples attending on dates. In different ways, that is very valuable,” he said. “Being in ‘A Christmas Carol’ last year, I got to meet a gentleman who was so excited. His family surprised him with dinner and a show. Here he was, at 60 years old, seeing his first piece of theater. And his smile, and the look on his face … “

Whipple smiled and shook his head in wonder. “I’d pay anything for that.”